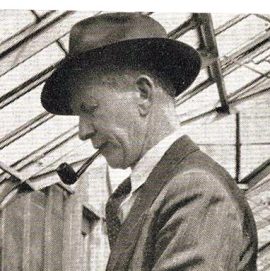 George Pring and his work are also well documented in the Journal. Since Pat Nutt had the privilege of knowing George Pring and working with him I called and asked if there was anything he wanted to share with the society about this incredible individual. He response was one of deep admiration. Pat felt he had no better mentor than George Pring, a man dedicated to horticulture and a fine teacher. Mr. Pring had attention to detail and integrity, making sure all plants were labeled correctly. Pat related one story which illustrates this: “A shipment of lilies was delivered with all the tags mixed up, when Pat suggested to Mr. Pring that they grow out the lilies to properly identify them, Pring’s emphatically told Pat to “Throw out the lot”. Better to lose a few lilies than to perpetuate misidentification confusion.

Of her father Isabelle Siebert says, “Pop loved people and plants in that order and they loved him.” He served Missouri Botanic Gardens for 63 years retiring as superintendent. His last accomplishment of note in the field of water lilies was designing the magnificent lily pools at Longwood Gardens. He spent his declining years at Longwood with Isabelle and her husband.

Although his eyesight failed, Pop recognized every plant by touch when taken through the conservatory. This was the mark of a true plant lover.