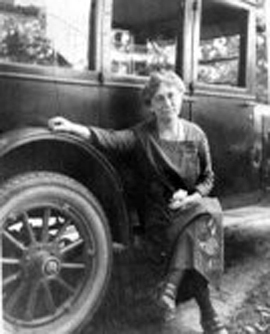 “Our life today is so hurried and so fit” of stress, and we necessarily live under so much pressure, that few of us take time to enjoy the beauties of nature and obtain the extremely restful benefits of getting back to the soil in our own gardens.” Helen Fowler (1936)
L. Helen Shaw was born in 1873 and was brought up on the Walter B. Shaw farm. Like her father, she had a great interest in waterlilies. Helen was very skilled at overseeing the water gardens and by 1911 she took over the management. In 1912, Shaw took his passion commercial, with the W.B. Shaw Lily Ponds. With Helen’s help, W.B. Shaw Lily Ponds sold both the waterlily plants and blooms. In a few years they were the country’s largest exporter of cut
water flowers. Daily they shipped thousands of 63 varieties of handpicked lilies, to large cities as far west as Chicago. During the season, more than 3,000 flowers were shipped each day. In a season as many as half a million blooms were produced and plants were shipped as far away as Thailand. Helen took over the business after her father died at age 83, in 1921. She was responsible for turning her father’s avocation into a successful business. In addition to growing more of the new colorful European and American hybrids, she saw to it that new and exotic varieties of waterlilies and lotuses were developed. She also made international trips to find different varieties of Nelumbo and Nymphaea. About a dozen new Nymphaea were hybridized at Shaw’s from 1905-1935, including three of Helen’s creations. N. ‘Rose Arey’ was hybridized in 1914 and received awards of merit from the NY Horticultural Society and the RHS. It still is considered one of the most beautiful and elegant pink waterlilies.

Helen was a noted horticulturist in her time, a very capable woman, and the first woman in DC licensed to drive a truck. She was in charge of running the Farm, which was also kept open for the public to view the lilies on Sunday mornings during the height of the season. During the 19205 and 30s, visitors numbered as many as 5—6,000 per day. The Shaw property was particularly attractive because it had been left almost entirely in its natural state.
In 1938 the US Department of Interior purchased the gardens for $15,000. After 56 years as a commercial water garden, WB Shaw Lily Ponds became a National Park and was renamed Kenilworth Aquatic Gardens. Helen Fowler remained as the Garden Director until 1940, when she retired. It was reported that when she died in 1957 her ashes were scattered over the ponds. The free Park is still in operation, the only National Park site devoted to the  propagation and display of aquatic plants. As part of the 700-acre Kenilworth Park & Aquatic Gardens, the 14-acre Aquatic Gardens provides a sanctuary for waterlilies, lotuses, aquatic plants, and countless varieties of wildlife, just minutes away from the city. The Aquatic Gardens were added to the National Historic Register in 1978 and also designated as a Category H National Capital Landmark. Kenilworth Aquatic Gardens has an annual tribute to WB Shaw
and Helen Fowler at the end of July that celebrates the wonderful legacy they left.

Helen Shaw Fowler would be considered a remarkable person by 21st century standards. What makes her even more outstanding is all she accomplished in the early 20th century. Helen correctly judged the tremendous potential of the aquatic plant industry, and t1reless promoted water gardening. The number and variety of plants were greatly increased by her  hybridization and  collecting efforts, many of which are still popular today. She was intemationally called “The Water Lily Lady” and traveled around the world looking for new varieties of waterlilies and lotuses to bring back to the Gardens. Helen Shaw Fowler was an exceptional woman for many reasons, especially considering the time in which she lived. She made a name for herself as a noted horticulturist, an astute businessperson, and a waterlily hybridizer, importer, and grower. She was the visionary who understood the importance of the water  gardens and wetlands area to the Capitol City.
And most of all, Helen Fowler was responsible for the US’s only aquatic plant park. a green gateway that is a lasting legacy to the citizens of DC and the entire waterlily community at large. 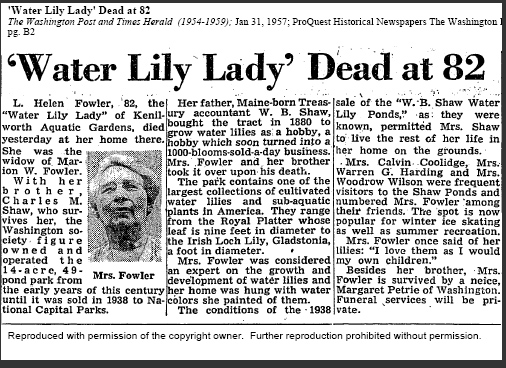