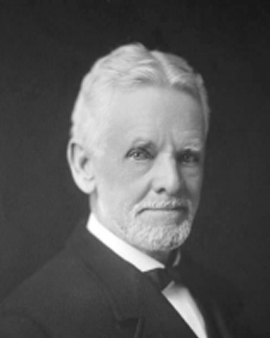 James Gurney was born in Buckinghamshire, England, the son of a gardener, and went on to work for the Duke of Bedford at Woburn and to study and work at Regent’s Park and the Royal Botanic Gardens at Kew gaining much valuable experience in charge of the aquatic  Section. In 1851, the young Gurney was the first to show Queen Victoria the Amazon lily to which her name was given and to tell her its history. At age 36, he moved to St. Louis Botanic Garden which had been founded by his employer Henry Shaw. Shaw was another immigrant (from Sheffield, England) who had made his fortune during 19 years as a merchant supplying goods to settlers as they moved West.

He ‘retired’ at the early age of 39 and, after a period of travelling, acted as a benefactor to the local community. The St. Louis (now Missouri) Botanic Garden had been opened by Shaw in 1859 with the aims of emulating Kew and with guidance from the eminent botanist Dr. George Engelmann. In 1867 James Gurney arrived and became chief gardener at the gardens, working there until 1903. It was Gurney who introduced lilies to the garden and who encouraged the building of the first Victoria pool around  1895. In 1867 he also became chief gardener and subsequently superintendent (1869) of the adjacent Tower Grove Park, which was opened by Shaw in 1872. Gurney remained at Tower Grove, with its famous waterlily displays, until his death in 1920.

He was succeeded by his son James Granville Gurney Jnr. and granddaughter Bernice who continued as Superintendent until 1976 and died in 1996. A keen water gardener and hybridiser, Gurney introduced a great many night bloomers including ‘Rufus Lackland’ one of the first hybrid reds, and ‘Emily Grant Hutchings’, ‘H.C.Haarstick’, ‘James Gurney Jnr.’ and ‘Stella Gurney’ among others. He also arranged illumination of the displays to allow them to be seen at night. The lily introductions were listed at the Botanic Garden between 1913 and 1922, but they had been introduced earlier.
In his time at Missouri Botanic Garden and Tower Grove Park, Gurney and his 40 workers increased the numbers of trees on the site from only 3 to over 20,000 and the Gurney family became synonymous with the gardens.

Gurney was a philosopher at heart, despite his achievements, he was quoted as saying ‘I am just a gardener’. The award was received by Fletcher Gurney, the great grandson of James Gurney, who had made a special visit to our symposium to pick up the award. 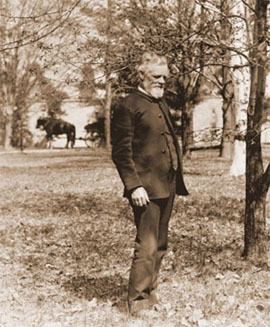